Scroll down to view video and to download the outline and game board!!

a. It can result in fewer overall calories consumed

i. Research shows that 30% fewer calories overall results in longevity, disease prevention, and anti-aging.
ii. Super hard to eat 30% fewer calories (i.e. 1700 a day if your body requires 2000) when you eat all the time—divide 1700 by 6 meals and snacks….doesn’t work well.

a. It can result in more overall calories consumed
b. It raises insulin levels (fat storage hormone)
c. It allows for less glucagon to be released (fat releasing hormone)
d. It creates more cravings every time blood sugar goes up and down
e. You will have less sensitivity to ghrelin and leptin (hunger hormones) 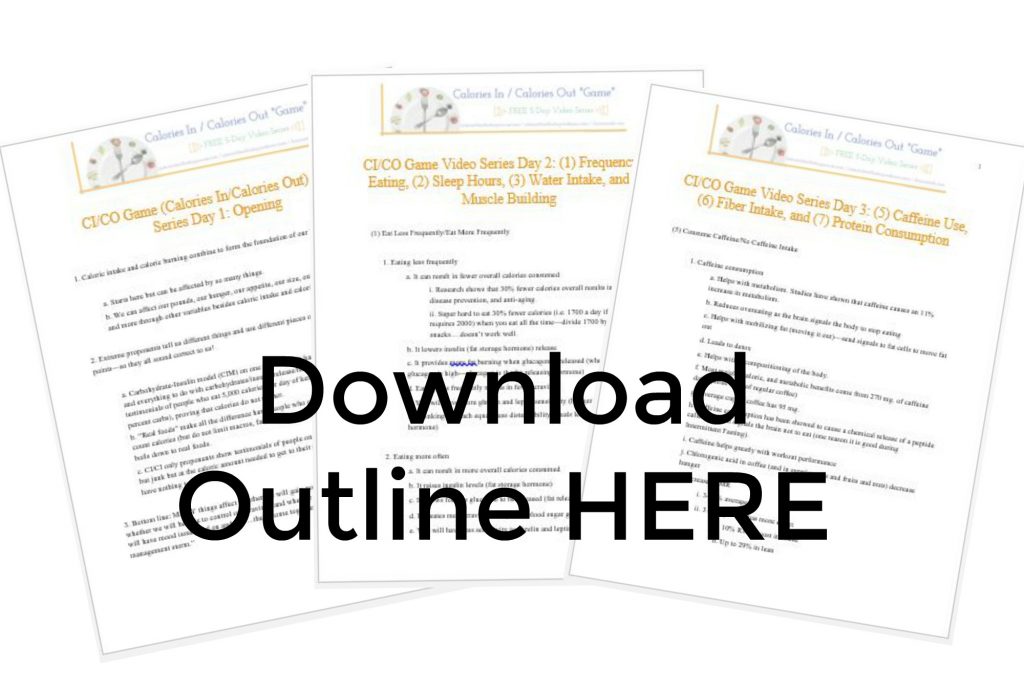 (2) Sleep 7-9 Hours a Night/Sleep Under 7 Hours a Night—According to Centers for Disease Control and Prevention, 35% of people are sleep deprived!

1. Sleeping 7 hours or more a night

a. It results in more release of Human Growth Hormone (HGH), which helps you create muscle, burn calories (released in deep, long sleep between 4 and 6 am)
b. It leads to fewer cravings
c. It provides a boost in metabolism
d. It gives you better insulin sensitivity
e. Leads to more regulating of hunger hormones (ghrelin and leptin)
f. Helps you have better workouts
g. Way less stress hormone (cortisol—a hormone that increases hunger and cravings, and much more!)

2. Inadequate sleep has been shown in study after study to negatively affect weight management

a. High link to obesity and insulin resistance
b. Sleeping six hours or fewer affects ghrelin and leptin (hunger and satiation hormones)
c. One study showed that just sleeping one to two hours less caused a 24-30% increase in hunger
d. A study on obese women at the same caloric intake had great fat loss until they divided the groups in two and the second half reduced their sleep, resulting in half the fat loss from that point on from the other group (with no caloric or energy expenditure changes)
e. Research shows a 55% reduction in fat loss for sleep deprived people.
f. Another study showed a 30% drop in insulin sensitivity after four days of sleep deprivation.
g. Studies show that sleeping under six hours results in lower leptin levels, higher ghrelin levels, and a distinct trigger in the brain requiring more food.
h. Inadequate sleep slows down Human Growth Hormone (hGH).

a. It results in drinking fewer sugary drinks (fewer overall calories, less insulin spike)
b. Gives a metabolic boost
c. Helps with fat mobilization
d. Tricks ghrelin into thinking there is food in the stomach

i. Ghrelin produced from gut and tells hypothalamus/brain you are hungry.
ii. Can be trained
iii. Water and sparkling water helpful for ghrelin
iv. Comes in ten minute waves

e. Gives less chance for dehydration (which is often confused with hunger…dehydration can cause you to eat more)
f. Provides earlier meal satiation
g. Has shown to lower caloric intake
h. Gives better detox Fat and toxins are released through water.
i. Provides hydration of the liver. Hydrated liver helps with fat loss.
j. Water increase is associated with 44% more weight loss.
k. Study of American Academy of Dieticians found that people who drank 1-2 glasses of water before eating ate 75-100 fewer calories.
l. Just 17 ounces of water has been shown to boost metabolism by 10-30% for up to one hour following. 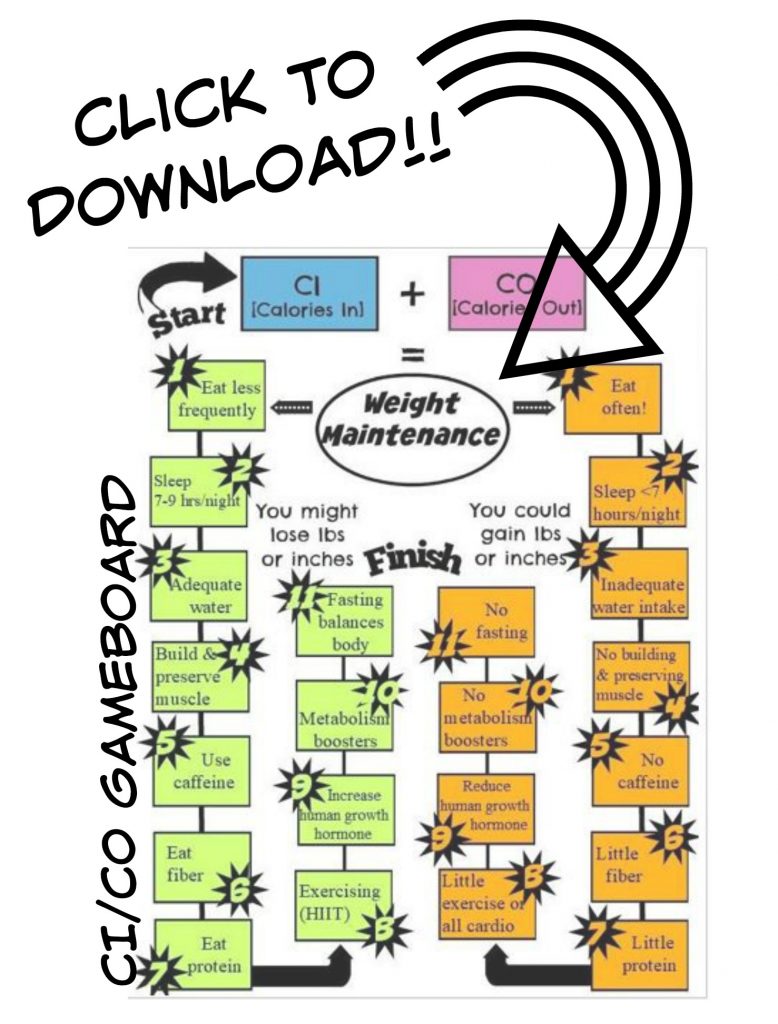 a. Muscles burn calories all the time—increasing your TDEE (Total Daily Energy Expenditure)…you can eat more!
b. Muscles make you look much better
c. When fat is decreased and muscle is increased, you have an inch loss/size reduction in clothing

2. We do not build or preserve muscle when we

a. Eat little protein
b. Do not work our muscles
c. Eat too many processed foods
d. Have little Human Growth Hormone
e. Eat more calories than we need (which are converted to fat).