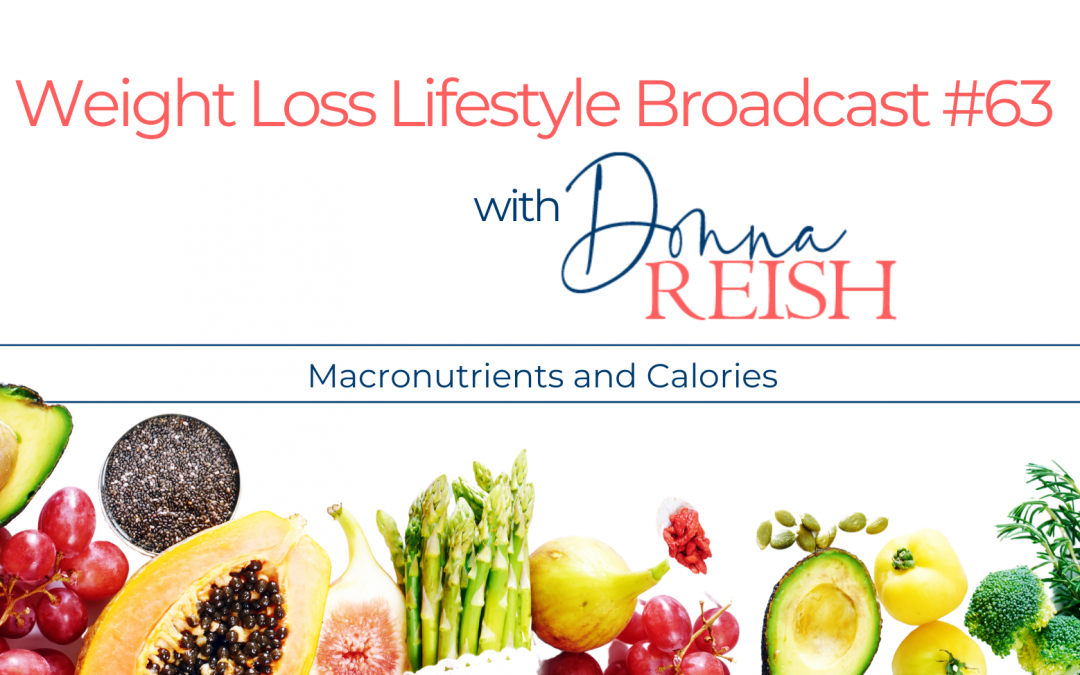 Hi! I’m Donna Reish, IF teacher, weight loss coach, blogger, and half of “The Minus 220 Pound Pair” as my husband and I have lost over 200 pounds together (160 of that in the past couple of years through the Perfect Storm of Weight Loss strategies I teach!).

In this episode, I present an explanation of Macronutrients and Calories.

One macro at a time, I explain the major elements and facts of each, how food is comprised of them, and why we need them.

A. What Are Macronutrients?

1. Often called “macros” in the fitness world
2. Three main nutrients that make up our food
3. They are BIG, thus called Macros (as opposed to vitamins and minerals, which are called micronutrients)
4. They make up our entire caloric intake each day (unless you drink alcohol; that is another calorie source)
5. Mathematically, your entire calorie consumption in a day comes from these three macros combined

1. FOUR calories per gram of protein, so good macro for calorie counters
2. Considered most satiating macro because it helps you feel full longer since it is slow to digest
3. Known to rev up metabolism by 15-30% after consuming it
4. Most easily recognized by hunger hormones
5. Protein’s negatives are that best sources come from meats (and organic is expensive); too much can cause kidney damage; some sources are super fatty, which increases calories and can be less heart healthy
6. Good percentage for many people for weight loss is 35% or approximately .75 grams of protein per pound of body weight
7. Builds muscle and is a core component in organs, bones, and most tissues
8. Made up of amino acids
9. Essential amino acids are necessary and not made by body—must be eaten
10. Two types

11. Fatty proteins are part protein and part fat (some animal protein, dairy, nuts, salmon, eggs, nut butter, seeds)
12. Lean proteins will be all protein (egg whites, chicken, turkey, not fatty fish and seafood, plant and whey proteins, lean meats)
13. Can raise blood sugar/cause an insulin spike but not to the extent that carbohydrates do
14. Studies have shown that people who eat 30% of their calories in protein consumed 441 fewer calories than those who did not—satiating, long lasting, metabolism revving!

1. FOUR calories per gram of carbohydrate so good macro for calorie counters
2. Most easily accessible source of energy
3. Largest insulin spike of the three macros
4. Least satiating macro since it is turned into glucose or glycogen quickly and used for immediate energy (exceptions are slow digesting carbs and fibrous carbs)
5. Negatives associated with carbs are that they spike insulin and keep you in sugar burning rather than fat burning; most processed foods and snacky foods are high in carbs so many people do not get their carbs from real foods; processed carbs are addictive (because they spike insulin/blood sugar all the time and because the pleasure receptors in the brain are very affected by them); people eat too many carbs and not enough of the other macros, especially protein.
6. Good percentage for many people for weight loss (especially those who have had trouble losing weight) is around 25%. (This would be approximately 100-120 carbs per day for a person consuming 2000 calories.)
7. Brain needs glucose and will get it first from carbs then the other macros
8. Processed carbs are least satiating of all macros—leave stomach quickly, used easily for energy, not filling
9. Fiber is a type of carb that is folded into the total carb count on a nutritional label
10. Low carb people often subtract the fiber from the carbohydrate total since fiber isn’t digested in the same way as other carbs and doesn’t “count” in terms of insulin spiking. (People who count both calories and macronutrients do not subtract fiber from their carb calories.)
11. Two main types of carbs

1. NINE calories per gram of fat so not good macro for calorie counters (when only considering calories alone)
2. More satiating than carbs because they stay in the gut longer (ghrelin isn’t spiked as much since stomach has something in it for a while)
3. In terms of sheer calories, fat should be more satiating than the other two because they contain 2x (plus) the number of calories per gram than protein and carbs
4. Smallest insulin spike of all three macros
5. Negatives associated with fat are that people eat too many unhealthy fats that cause heart issues, blood pressure issues, etc.; that they are calorie heavy, so eating too many fat grams simply gives you too many calories for the day; people often eat trans fats in packaged foods (and the carbs in these lead to cravings)
6. The basis for the keto diet—75% carbs so keto people have to rely on fat bombs, butter on meat, cream and oil and butter in coffee, etc., for most of their calories
7. Trans fats are the worst fats to consume for heart health and are found in packaged foods
8. Fats are found with protein in fatty meats, dairy, nuts, eggs, salmon, chicken skin, nut butters, and seeds
9. Fats are found alone in butter, oils, avocados, and olives
10. Most important fats are fatty acids that the body doesn’t produce 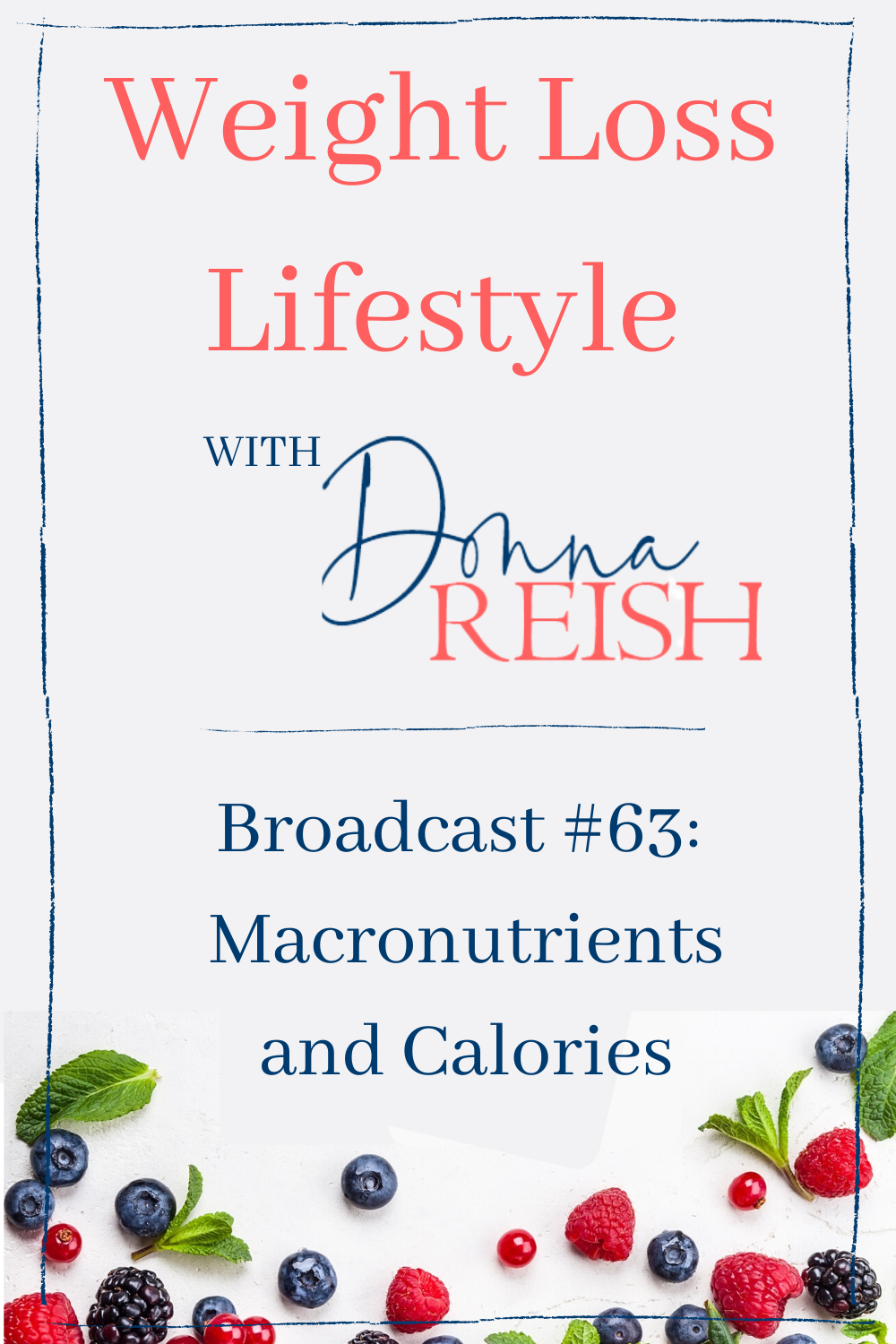