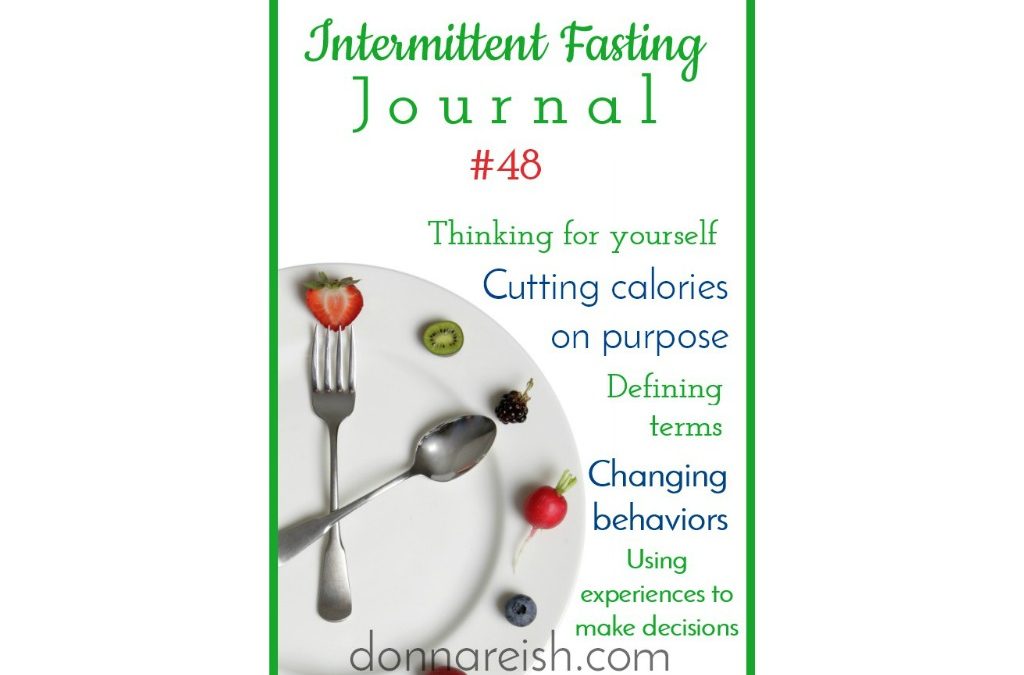 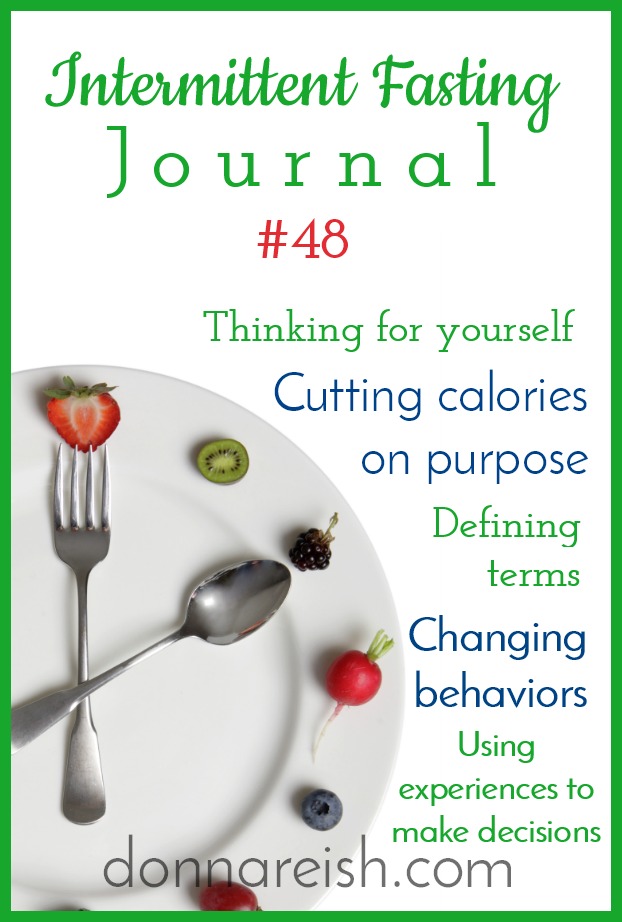 In this broadcast, Donna Reish, author of over 100 curriculum books for students, blogger, weight-loss coach-in-training, and Intermittent Fasting teacher, goes where few IF peeps go: the calorie problem.

She opens with a study that shows just because “experts” say it doesn’t make it true. (Especially when other experts/researchers say something different!) You have to bring together research, your observations of those around you, and your own personal experience.

Donna delves into how the thought that calories have no bearing on weight loss (or health!) can be dangerous because consistently overeating can cause little weight loss, health concerns, unnecessary expense, and more.

Then she introduces fifteen clues that show that maybe you really do believe in calories—just a little. And what we should do with this information (i.e. eat less overall!)

These clues range from watching the calories you burn on devices to cutting back portion sizes to your past history of losing weight while decreasing calories to eliminating nuts or other fattening foods, and more. She emphasizes the importance of defining what you mean when you say “calories don’t work” or “calories don’t matter.”

A. Introduction—Everyone jumping on the “calories don’t count” bandwagon reminds me of the study done by psychologist Solomon Asch in the 1950’s. (Non-related to calories, the study is detailed in Chapter 9 of Atomic Habits.)

a. Subject entered the room with other people who were actors (subjects didn’t know this)

b. Group shown one card with a single line on it and another card with three different sized lines on it (A, B, and C

c. Each subject asked to choose the line on the second card that was most similar to length of line on the first card

d. At first everyone agreed

e. Then the actors were told to give the wrong answer

f. Subject would watch actors do this—and laugh at first but then they agreed with the actors

g. As the number of actors increased, the conformity of the subjects increased

h. One actor and one subject—no change

i. When the actors got to eight total, nearly 75% of the subjects agreed with the actors even though the answers were wrong.

2. Applying this to calories

a. Various eating protocols have come forward telling us that calories do not matter, they are outdated, they have no effect on weight, etc.

b. They say that only the food types matter (keto, low carb, vegan, vegetarian, low fat etc.—they all work!).

c. And we hear it so much that we can become like the subjects in this study—these people must be right. I don’t know what I’m talking about.

d. Calories are not everything—but to say that they do not matter isn’t true—and is not believed by that many people (according to the clues below).

e. Saying that calories do not matter at all is dangerous to those happily eating a certain protocol—but consistently overeating, causing little weight loss, health concerns, unnecessary expense, and more.

f. See if any of the “clues” below apply to you—maybe you really do think that calories make a difference? Even if it is only part of the picture!

15 Clues That You Believe Calories Matter

1. You fast to reduce total intake to a short period of time.

2. You believe research that controls calories.

3. You cut back on your food to prepare for a calorie dense occasion.

4. You know people who have lost weight with calorie reduction.

5. You add another protocol to fasting as you get close to your goal weight (reducing intake further).

6. You cite the Biggest Loser Study (in which participants actually did lose weight reducing calories).

7. You do little calorie-saving things like air pop popcorn, use an air fryer, use almond milk instead of cream, etc.

8. YOU have lost weight before on low calorie diets.

9. You don’t define the phrase “calories don’t work” when you say it.

10.  You buy individual packs of nuts because they’re “too fattening” by the handful.

11. You don’t eat keto–so you spike insulin every time you eat…..so do you really believe it’s all about insulin and never calories?

12. You say “so and so says” because you’re not sure yourself that calories have no effect.

13. You say “I need to reduce portions” or “I need to quit snacking”—this is the same as saying “I need to cut my calories.”

14. You look on your Fit Bit or smart phone to see how many calories you’ve burned.

15. You pay attention to calorie counters on exercise machines.

***You don’t have to count calories to lose weight (I don’t). But you probably show in the clues above that they do affect weight control!