In 1988, at an advertising agency meeting, the infamous saying, “Just do it,” was coined. It is thought to have increased the sales of Nike shoes from 18% to 43% (from $877 million to $9.2 billion). The slogan is considered to be one of the top two taglines of the twentieth century. These three words are often associated with the Nike “swoosh,” which is said to further capitalize on the “do it” attitude of the brand’s slogan. 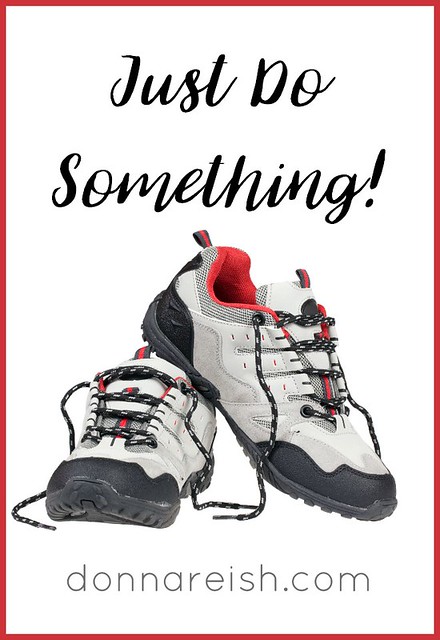 Since that time, people have used these words for everything from encouragement to get a lot done to chants and cheers for sporting competitions and even for sexual innuendos. (Come on, you know you’ve said it before! 😉 )

So what does that have to do with healthy cooking, sugar-free eating, and/or efficiency in home and business?

No, I’m not going to tell you to chant the Nike slogan the next time you are faced with a difficult task (or a not-so-difficult-task that you simply do not feel like doing).

Chanting seldom works for most of us.

But I do invite you to take another look at this slogan—and tweak it to meet your needs when you are in a “can’t get anything done” slump.

Rather than telling you to “just do it,” I recommend that you “just do something”!

When we begin a work session, we usually have certain tasks in mind that we need to do. We often have a list. Sometimes we even have a task list AND a timer.

And what usually happens when we just cannot muster the strength, creativity, inner confidence, or self-government to complete what we have set out to do?

We become paralyzed with the tasks at hand and simply “opt out,” telling ourselves that we will do this job or task list later, when we are in a better frame of mind or when we are less distracted or when we are more motivated or feeling more creative.

And that time is completely wasted.

An approach that I have adopted in these situations is to change the “Just Do It” to “Just Do Something.”

I don’t have to do that exact thing on my list at that moment. (It’s not like it is going anywhere.)

I, probably like you, have task lists in every category of my life, ministry, and businesses. Family lists. Personal lists. Blogging lists. Plexus business lists. Recipe testing lists. Curriculum writing lists. Teaching lists. And the “lists” go on and on. (And my to do lists are always prioritized with my ABC’s of Prioritizing approach to help me see at a glance what is needed right away and what is not.)

It’s not like I could ever run out of something productive to do….and neither can you, most likely.

So rather than not getting anything done at that moment when what you’ve set out to do eludes you, just grab something from another list. Just do SOMETHING!

I use self talk a lot. I tell myself, “Well, I can’t face typing up all of the changes to that recipe, but I can go sort ingredients for tomorrow’s recipe testing.” OR “I do not feel like writing that new lesson for my new writing book, but I can put on a talking book and edit one that is already written.”

At the end of the work time, I am not defeated or overwhelmed that my list has not changed in its number of tasks. I’ve done SOMETHING…even if it wasn’t what I set out to do.

This approach also works when your environment has changed suddenly. I mentally have a list of things I can do when kids stop by and are talking to my husband or raiding the fridge. If they are not there to specifically visit with me but just waiting on a ride or grabbing some food while they text or chat with my husband, I know that is a good time to do some tasks that do not require a quiet environment. The same is true when I’m writing but then the phone rings and I know one of the kids is driving and wants to chat a while. I close my computer, put in my blue tooth, and organize, clean, or cook. (When kids stop by, I almost always work on kitchen work while they sit at the bar and talk to me….I just love this!)

My environment changed, but I can still get SOMETHING done.

So Nike’s Just Do It becomes Just Do Something—and the swoosh is still relevant….as you “swoosh” through tasks on your lists!