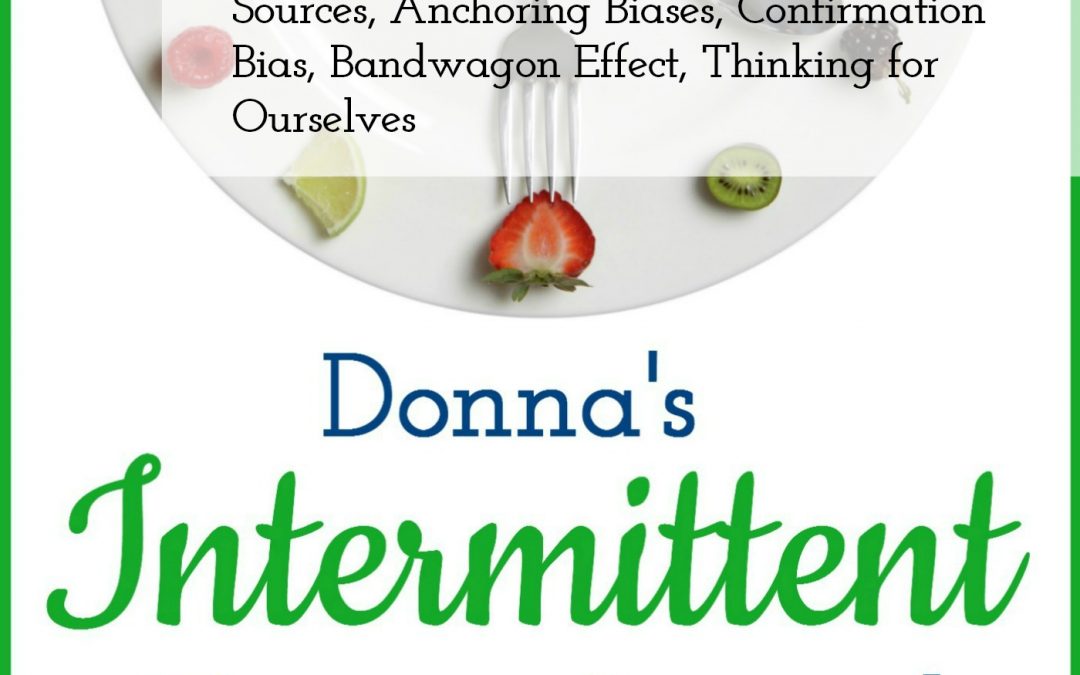 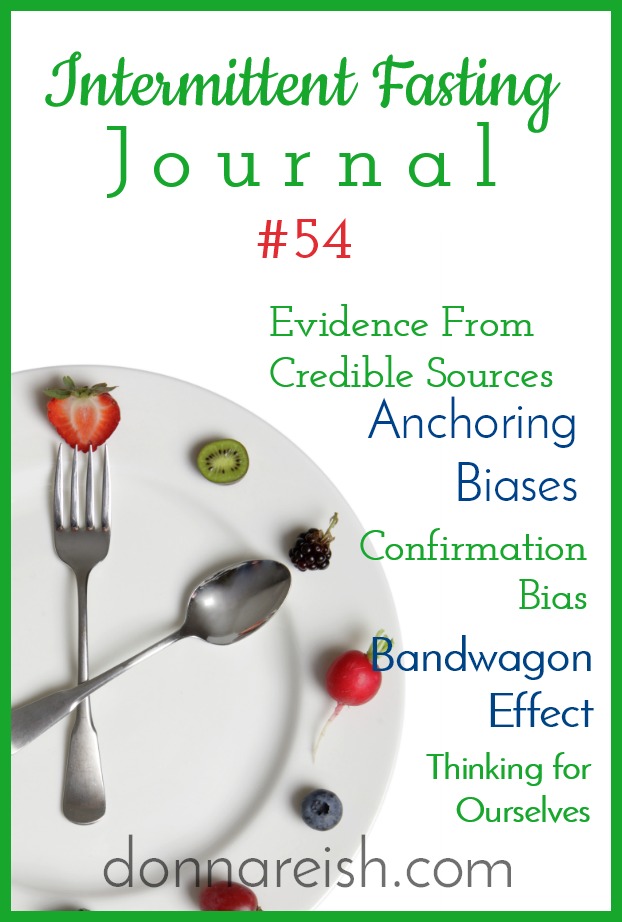 In this broadcast, curriculum author, IF teacher, and former debat coach, helps listeners cut through the noise when it comes to claims, beliefs, and research about weight loss, macronutrients, and more. She begins by drawing on her experience as a high school debate teacher and coach to point out that the terms people are using must be defined in order for us to put them in context and see if they apply or not. Then she explains what logical fallacies and biases are–and how they apply to all people at all intellectual levels. Then she delves into the six common logical fallacies and biases with their definitions, explanations, applications, and what to look for with each one. These include anchoring bias, choice supportive bias, confirmation bias, ostrich bias, bandwagon effect, and false consensus effect. Her hope is that we will use three lenses to evaluate whether something works for us or not in applying what we hear and read:

A. Why I Want to Teach About Research and Thinking

a. Teach levels of reading—literal, inferential, critical
b. Teach our kids not to believe everything they hear or read—to consider the source, experience, repeatability, logic, etc.
c. Teach our kids to be wary of people using the words never, ever, always, not, none, all, etc. (in our case, you will NEVER lose weight if you eat carbs or you will ALWAYS gain weight if you eat fat!)

a. Define terms—so many people do not do this when citing weight loss info

i. Calories in/Calories out doesn’t work (what doesn’t work about it?)
ii. We know insulin is all that matters ? (Matters for what?)
iii. We can see calorie restriction doesn’t work from the Biggest Loser study? (How doesn’t it work—-they lost weight, so it worked; if you mean they couldn’t sustain the protocol afterwards, then that part didn’t work)

b. Evidence from a credible source

a. Everybody has an opinion
b. Throw research around like it’s gospel regardless of source, date, repeatability, robustness, etc.
c. Confusing!

B. Why We Believe One Over the Other—Logical Fallacies and Biases

1. Who and what they appeal to

a. They appeal to the group and tell you that you are smarter (or make you feel that you are smarter—you and this whole group believes this, so it can’t be wrong!)
b. Appeal to the part of the brain that deals with emotion—the amegdela
c. They appeal to a primitive reaction (toddler brain)—making us feel smart
2. People who fall for logical fallacies and biases can be any intelligence level
a. Studies have shown that highly intelligent and less intelligent people fall for them equally (because of the part of the brain they appeal to—we all have that part of the brain working for emotional appeal, regardless of IQ)
b. Two race cars example

i. Can have two race cars—a beautiful, shiny. Fast,, new one and a clunker that hardly moves
ii. If both of them are turned off, the faster one still won’t “win”
iii. True with intelligence and logical fallacies—even someone who is extremely smart who is not thinking with their pre-frontal cortext but instead is being driven by emotion (amegdela), they still wouldn’t “win the race.”

1.Anchoring Bias—Believing the first piece of evidence you receive

a. This is super compelling in weight loss/nutrition—-we learn something from one source then any source that disagrees with that first source is automatically wrong
b. Since you have that first piece of “evidence,” you feel smarter even when other opinions are presented
c. Example:

i. I used to attempt very low carb and some keto. When I branched out, I was biased against carbohydrates, saying things like “If you’re going to eat an apple, you might as well eat a Snickers bar. At least it has some protein too.”
ii. My bias was anchored on the first belief that all carbs are bad—even healthy ones.

d. Things to look for: Do you never change your mind with new data?

2.Choice Supportive Bias—can’t see drawback in your own position

e. Once we make a choice, we can’t be wrong
f. We feel smart with our original choice and do not want to admit we are wrong
g. We won’t believe any downsides in our original choice because it makes us look like we were wrong; another choice or future info can’t be right
h. Research and critical thinking
i. Even good research can’t convince us when we have that first “must be right” choice
j. Tip: Be just as critical about what you don’t believe as you are about what you do believe.
k. Example:

i. I believed and taught that you should open your eating window with low carbs to keep insulin low for the first part of your eating window.
ii. I didn’t want to see any downsides to this (satisfaction, too many calories, etc.) since I felt that my original choice was right and I had been teaching it.
iii. Hard for me to go back now and say just open with real food—-not overeating (i.e. too many calories) and not concerned with macros, even though I know this is a more satisfying and potentially less caloric way to open your window.
iv. (Note: Many people NEED to open their window with low carb foods to keep cravings lower, but I no longer teach it as universal as it doesn’t help everyone.)

k. Things to look out for: Can you list the problems with your position?

3.Confirmation Bias—looking for evidence that agrees with something we already believe

a. We look for articles, studies, blog posts, FB posts, etc. that agree with something that we already agree with

i. This forces us to exclude good research or conflicting information
ii. It also forces us to stay in our own shell and only listen to people whom we agree with
iii. Makes us feel smart to find things that agree with us

i. The only reason we read through a thread on social media is for your own pleasure
ii. No research—just the fact that it confirms your bias towards something
iii. Confirming our biases makes us feel smart

i. We believe insulin is all that matters in weight loss, so when we see a study about how thousands of people lost weight with calorie restriction, we won’t open it—-can’t be true anyway.
ii. We purposely only seek out what we agree with.

d. Things to look out for: Do you seek out information because it makes you feel good?

a. Similar to confirmation bias
b. Decision to ignore negative info or research to the contrary
c. We ignore it entirely, sticking our heads in the sand
d. Example: I did this with Diet Coke—-wouldn’t read the info or research. Would delete articles people sent me.
e. Things to look out for:

5. Bandwagon Effect—cultural…something is popular everywhere, so people believe it

a. Huge in social media
b. This is probably the biggest bias we face today because of social media—so easy to join a bandwagon and be confirmed in what we believe every hour on the hour!
c. Fads/popular/cultural
d. We must be smart because so many people believe this!
e. Example: Breakfast is the most important meal (adults only—children and teens have different nutrition needs)….so many joined this bandwagon!
f. Things to look out for:

i. Have there been longitudinal studies on your position?
ii. Is there a consensus in the scientific community or is it primarily pushed by influencers?

6. False Consensus Effect—your group has special knowledge and knows more than other groups

a. Within a bubble

i. One of the biggest ones for people in live groups and social media groups
ii.When we are immersed in a certain belief with people who have that same belief all the time, we think that’s how everyone thinks or that is how everyone should think.
iii. Similar dynamics to bandwagon except not as universal—more in a bubble of a group

b. Bandwagon vs. consensus—this is often counter popular (going against the culture)
c. This effect also feeds into our self esteem—because people agree with us.
d. Example:

i. I was in an exercise group that said that weights were bad for you. I agreed with them, said I could never do weights, said they were boring and ineffective, made jokes about the metal and the clunkiness of weight machines at the Y, etc. because I was under the false consensus effect.
ii. And the group continued to feed into that belief.