Low Carb/Healthier Cooking and Baking: It’s All About Dilution

Funny thing about low carb/healthier cooking and baking…sometimes I feel like my daily goal is to make things taste as normal as possible. That is, figure out a way to make the dish not taste low carb—even though it is. 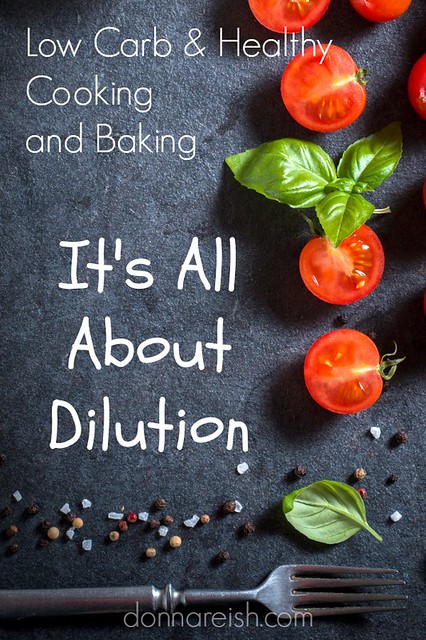 I am a picky eater….my mom tells the story of when I was six years old, and I sat at the table for hours rather than eat four peas that she was trying to make me eat. (I understand that I never did eat them, which might be why I hate peas to this day…)

Before I began eating healthier to keep from going from pre-diabetic to full-blown diabetic, I ate like a ten year old. I rarely ate fruits and vegetables (though I did fix them for our family religiously!). I loved Diet Coke, French fries, pizza, cream-filled donuts, and chocolate chip cookies.

Come to think of it, I still love those things, but I control myself greatly because I was frighteningly symptomatic there for a while—as in, unable to drive at night because of night vision problems and a brain fog that caused me to blurt out weird statements at any time. And I am a public speaker! Not good!

(Cue quick commercial here: Tired of carb cravings getting the best of you? I have a secret weapon—a daily “shake in your water drink” that keeps my appetite and carb cravings under control. Read more about Plexus Slim, the pink drink, here.)

So in an attempt to make myself “like” low carb/healthier foods, I discovered a little secret: dilution. Dilute the ingredients that I do not enjoy (flax or almond flour, for example) with foods I do like in order to come up with a finished product that is still low in carbs and healthy but not so low-carb-and-healthy-tasting.

For example, I found that recipes that were strictly flour-sweetener-egg (like a cookie, for example) tasted extremely low carb (and oftentimes “yucky”!) compared to recipes that had other things in them that I liked, such as bananas (and banana extract), sour cream, half and half, cream cheese, apple sauce, pumpkin, sugar free pudding, peanut butter, almond butter, sugar free chocolate chips, nuts, etc.

Wow! I decided I might be able to do this low carb thing after all…I just need to be sure that whatever I try to bake is heavy on ingredients I like and lighter on ingredients that taste too “different” to me and my family.

In practice, this means that we haven’t liked almond flour cookies or coconut flour bread, but we have enjoyed pumpkin bread, banana muffins, applesauce cake, peanut butter cookies, cream cheese brownies, etc. More of the “normal ingredients” and less of the “foreign ingredients” resulted in final products that we actually liked. And don’t even get me started on the cheesecakes and “cherry delight” types of dishes—which taste completely “normal”! 🙂

After three years of experimenting, I also found that I didn’t have to use all almond flour/flax/oat fiber/coconut flour, etc. I could use part of those (Basic Low Carb Flour Mix) combined with Sprouted Wheat Flour for yeast rolls and biscuits that I could even serve to company—while still keeping a carb count between four and ten carbs per serving and feeling good about offering healthy, nutrient-rich items rather than nutritionally bankrupt things.

(Obviously, too high for Atkins Induction or Keto—but certainly doable for people who are eating more moderate numbers of carbs, such as forty to one hundred carbs per day. And definitely doable for families who want to eat healthier/reduce their carb intake/eat lower glycemic index foods.)

So if you are trying to eat healthier/lower carbs, consider the dilution factor—try some low carb dishes that star peanut butter, pumpkin, or cream cheese. Try mixing it up with some Sprouted Wheat Flour—all while keeping tabs on the total number of carbs of the ingredients you are using. And maybe your family will enjoy lower carb products more. And maybe you will too!

Oh, and stay tuned. I will be adding more recipes each week—those that my family will eat and that my ten year old palate doesn’t think are “yucky”!  (Stay tuned for information on how I categorize/label my recipes for ease of use with all types of cooks).