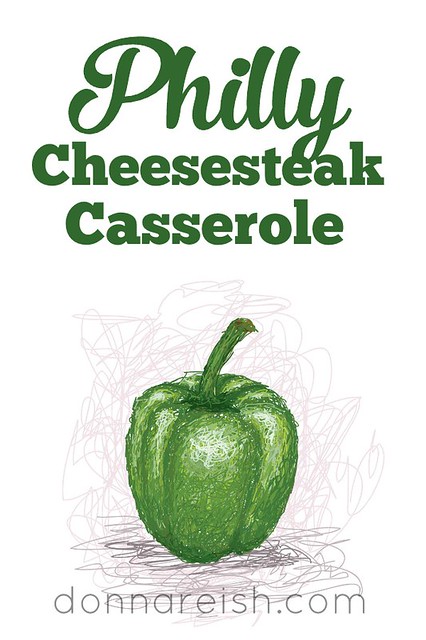 Since I had my bout with very symptomatic pre-diabetes a couple of years ago, I have been trying to learn to cook and bake dishes with fewer carbs/lower glycemic index. About a year into this cooking (several months ago), I realized that one of the things that I missed the most were my one-dish meals.

I have been a *freezer cook* for twenty-five years now, and one of the greatest benefits of freezer cooking is pulling a nearly-complete meal out of the freezer, adding a salad, and calling it dinner. With lower carb cooking, this was seldom a reality for me.

Instead, I would pull a meat entrée (meat loaves, meat balls, marinated chicken breasts, cheddar coated chicken thighs, etc.) out of the oven then try to figure out what low carb/healthy sides I could put with it—while still keeping college and high school boys and my husband satisfied and full.

I missed the ease of the one dish entrée desperately, so I have been on a search for more “casserole-y” types of healthy entrees for the past several months. I have a few for you that will be coming up in the next few weeks—and this is one of those.

With some veggies already in it and the addition of cheese, I have what can only be described as a “nearly-one-dish-low-carb-entrée”! 🙂  And one that my guys like! Yay!

I wanted to add that this entrée can be completely assembled and frozen in 9×13 foil pans—oven ready. However, when I did that, the dish was pretty liquid-filled. Not sure if it had to do with the freezing or not, and by its nature (onions and green peppers), it is somewhat liquid-y anyway, but I changed it up and froze the prepped ingredients in separate bags to assemble and bake after defrosting. It only takes an extra five minutes, but it seemed to reduce the water-laden aspect of the dish some. If ease is more important to you and draining off some liquid is just no biggie, by all means, assemble and freeze as a casserole! (I do love my stacks of foil pans in my oven way more than assorted zip-lock bags!)

Oh, and as I put healthier entrees up, I will be doing just what I’ve done below (and in my mix recipes up so far): putting the regular recipe for one entrée in the main ingredient list and putting the recipe times four in bold-font parentheses for those who want to make four for the freezer.

(Do this. It doesn’t take four times the amount of time! You will be glad you did!)

Don’t forget to scroll all the way down to the bottom of the page for this recipe’s helpful Recipe Keys!

Save Print
Philly Cheesesteak Casserole
Author: Donna Reish
Serves: 4- 5 hearty servings
Net Carbs: 23 grams | Amounts below for single, and quadruple batch for freezing
Ingredients
Instructions
Notes
Note: One of the three recipes that I used to develop this recipe called for a 12 ounce package of Hormel’s Thick Cut Beef for one entrée of this. See Store-Bought Stella note below the instructions for ideas for making this a quicker entrée.
Nutrition Information
Calories: 668 Fat: 42 Carbohydrates: 23 Sugar: 14 Protein: 33
3.5.3226
PIN THIS RECIPE!

1. One hour ahead of time: Place fresh meat in freezer so that it is easier to thinly slice it.
2. Prepare marinade by mixing all ingredients thoroughly with a wire whisk or in a food processor. Be sure all ingredients are completely processed together.
3. Cut meat against the grain into as thin slices as you can.
4. Divide meat among four one-gallon zip lock freezer bags.
5. Pour marinade over the bags evenly. Zip the bags, releasing the air completely.
6. Cut veggies up fajita style.
7. Toss the veggies with the remaining seasonings and divide them among four one-gallon freezer bags.
8. Divide cheese among four one-quart freezer bags (or just keep them in their package in your refrigerator until using this meal if they have a late date on them and you would rather not freeze them).
9. Secure two one-gallon bags together (one veggie bag/one meat bag) and one bag of cheese or place each set down into a two-gallon bags for a total of four entrees.
10. Label bags according to your desire (based on who is going to be cooking it, how often you make this entrée, etc.).

Here is a suggested label:

Philly Cheesesteak Casserole
Raw meat and raw veggies DATE
Place drained meat and vegetables in skillet. Cook until onions are done. Use marinade for “oil” as needed. (Do not fully cook beef.)
Transfer all to 9 x 13 casserole dish. Top with cheese slices. Cover with foil. Bake for 10 to 25 mins (convection vs. regular) until cheese is bubbly.

Low Carb (LC): This is a very low carb recipe though some consider onions to be “moderate” carbs. The total dish is still extremely low carb.

Family-Friendly Low Carb (FFLC): While this is a very low carb entrée, you could make it a more moderate carb/family-friendly carb meal by using a low carb bread or bun, making a low carb garlic bread, serving with brown rice or quinoa for children, or making another side dishes (such as cooked carrots or a vegetable medley).

Store-Bought-Stella (SBS): You may use two packages of Hormel All Natural Beef slices; cut into strips (you can use another brand equaling 12 oz of meat) without the marinade or precooking steps. You might want to sprinkle the beef strips with seasoning. If using these beef slices, you will need olive oil and some seasonings (sprinkles of Italian Dressing Mix?) when stir-frying the vegetables.

Homemade Hannah (HH): This is very homemade! You can make this pretty whole-foods as written above—or make it even more homemade by using your own dried herbs.

Trim Healthy Mama-Friendly (THM) (www.trimhealthymama.com): This would be considered an S entrée for THM followers. The fat in the beef, as well as the oil in the marinade and addition of cheese at the end, makes this a healthy S (but not too heavy).

Gluten Free (GF): No fillers so no concern about hidden gluten.

Freezer Cooking (FC): This is a new freezer recipe in the past year for me. I am happily adding lower carb “casseroles,” one-pan, and crock pot freezer entrees to my repertoire that are not so carb-laden, but are still family-friendly!